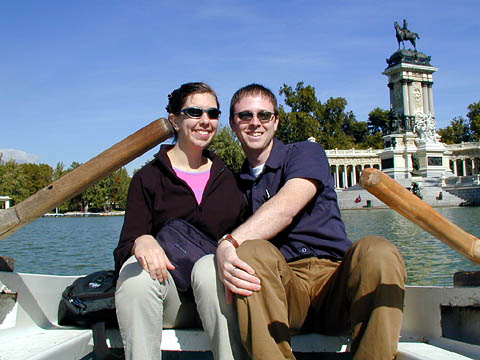 I was still fighting a cold that I picked up in Munich. We did a bus tour of Madrid and stopped at the Prado and whipped through. By the time we left there was a huge line. Somehow we always beat the crowds. While in the museum we mostly concentrated on Spanish artists. Enjoyed El Greco, Goya and Velasquez. We rode the bus over to the Palace area and had dinner in Plaza Mayor after searching around for tapas for a while.

I was still feeling a bit under the weather so we took it easy in the morning and took a bus tour of El Escorial and The Valley of the Fallen. The tour of El Escorial was cool and the palace was different than what we have seen before. It was very simple with lots of blue and white tiles. King Philip the II liked to live like a monk. I convinced Jay to touch a marble statue by telling him that it was a real cushion. The Valley of the Fallen was amazing from afar. Once there we saw a rainbow through the rain. It was a bit disappointing to learn that no battles took place there. In the evening we tried to find a vegetarian restaurant that was listed in our guidebook, but it was closed so we opted for a place that was nearby. We screwed up and ordered way too many canapes. Uggghhh.

A lot of stuff is closed on Monday so we tried to do all of our sightseeing the first few days we were here. We took the City Bus tour as a way of transportation and met a nice couple from Auckland New Zealand. They run a B and B so we are hoping to stay with them when we go to New Zealand. It was called Hey’s Homestay. We went and checked out Picasso’s Guernica at the Museum Centro Reina Sofia. There were also some cool Dali’s and Miros and the Glass elevator was also a highlight. We tried to walk through Retiro Park, but it was closed where we tried to enter it. Eventually we found our way to the Pond in the center and Jay rowed me around in a rowboat while I ate an icecream popsicle. Sometimes I feel like the luckiest girl alive. After our boat excursion we walked down the Gran Via and went to a great bookstore that had a decent English section. We went back to the vegetarian restaurant and had an awesome late lunch around 3:00. We have had so much trouble adjusting to the Spanish eating schedule. Most places are closed from 5 to 8:30pm. After a wonderful veggie meal with an awesome banana cake dessert we went to EasyEverything.

We checked out of the Hotel Montalvo in Madrid. Thank God! I think they will win the worst pillows award. Otherwise it was a decent hotel. Mostly because of the location. It was near a cool square called Plaza Mayor and very close to Plaza del Sol. Took the train to Toledo and checked into the Hotel Maravilla. Once again our pillow cases have no end. Spent the afternoon wandering around Toledo and went inside the cathedral and saw some good El Greco Paintings. In the afternoon we chilled out at a cafe in Zocodover square and watched the weirdos trickle by. Had a yahoo conference with David and Hunt. David told me that someone was impersonating me from EasyEveryThing using my jjzach id. We can’t figure out how that happened. We had dinner at the restaurant in our hotel and were pleasantly surprised by the quality of the meal. Our stewed partridge was fantastic. My fruit pudding dessert was great, but Jay’s Chocolate Peras was basically a chocalate puddle.

Went to the Carlos the V exhibit at the Museo Santa Cruz in the morning. The exhibit was interesting and the buiding was beautiful on the inside. Took a train tour outside the city to get a view of Toledo from afar. Had a nice lunch at the proper time and came back to the room for a siesta. Walked around the city at dusk tring to find the perfect light. Ate right across from our hotel outside.

We missed our train in the morning by a few seconds and decided to skip Segovia. We wouldn’t have gotten there until 4 or 5 pm and we had to leave really early the next day to catch our flight to Portugal. Spent over an hour at the train station calling places in Madrid and Toledo trying to find a place to stay. Tried the nicest place outside of town with a view of Toledo and the actually had vacancy. Had a very relaxing day lounging around the Parador Nacional Conde de Orgaz Hotel enjoying the views. Stuffed ourselves at lunch. Off to Portugal first thing tomorrow.

For Pics visit our Spain Gallery.

This entry was posted in adventurously, bigtrip and tagged bigtrip. Bookmark the permalink.